Black Diamond Social Club provides some advice on how to treat gray hair in men. If you're going gray, they might have some good tips for you.

I date a guy who is in his 40’s and he has some gray hair. Its not fully gray, but he is a little paranoid. I am only in my 20’s, so I think he is trying to stay young and prove he can keep up with me.

I don’t think he needs to do anything about the gray, I actually think he looks sexy. Distinguished and masculine unlike most “dudes” my age who look like they don’t know what a comb is, or wear the latest haircut that Justin Bieber had on the latest magazine.

But I understand, we all have things about ourselves we would change if we could. So I started looking for some natural remedies to help him. I don’t dye my hair because I think such harsh chemicals would ruin it over time, so I wouldn’t want him to either. After doing some research, I found a few things we tried to bring his hair back to the natural dark brown that he had a few years ago.

First we needed to make sure there wasn’t any medical reasons for the gray. It didn’t seem likely because he is at an age when men go gray, but it doesn’t hurt to double check. We had him tested for thyroid issues because things like Grave’s disease, Hashimoto’s disease, hyperthyroidism, and hypothyroidism can cause gray. He was ok there.

Smoking is linked to gray hair, but he has never been a smoker.

I found a study by the Journal of the American Academy of Dermatology where scientists observed that obese people may face an increased risk of early gray hair. He is a bigger guy, but that didn’t seem to be it, and I wouldn’t say his came early. Of course, the doctor did recommended losing weight.

Some vitamin deficiencies can make hair go gray, so we had some blood work done. It was time for a check up anyway. Among the things we checked for were B12 deficiency. You get this vitamin in things like meat, eggs, and dairy products. Being a steak and potatoes kind of guy, he eats plenty of that so it wasn’t the issue. He gets plenty of vitamins by taking a men’s multivitamin, and I make a healthy dinner for the two of us every night so I know he is well taken care of in that regards.

Now some medical issues where people have trouble absorbing nutrients will cause a deficiency. Usually, these involve the stomach or small intestine, things like Crohn’s disease and celiac disease. Even gastric bypass surgery can reduce vitamin absorption, but none of these things applied.

Stress they say can cause gray hair, and some research backs this up. Its called oxidative stress, and following a diet high in antioxidants can protect against the damaging effects. No evidence shows that it can reverse the graying but it may slow it down. Besides, a healthy diet with a high intake of antioxidant rich foods makes sense for your overall health, so why wouldn’t you do it?

Another thing is shampoo. While I doubt it would make hair go gray, cheap shampoo can leave hair fragile and prone to breaking. It can also dry it out and make it look worse. So I made sure we had a good shampoo in the bathroom.

After our doctor visit, and eliminating the possibly health related causes, we determined that his gray was caused by the most common reason most people go gray: Genetics. I guess you cant beat Mother Nature, but you can slow her down. And that’s what I set out to do with my natural remedy.

To read the rest of this article, head on over to BlackDiamondSocialClub.com 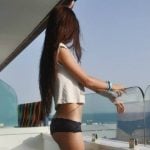 Brooke Bailey is a personal trainer, masseuse, and student in health and wellness. She currently resides in Pittsburgh, Pennsylvania.

Have Fun With a Quiz

Zesty Quiz: What Crazy Way Will You Die?

4 Ways to Make a Cozy Home

Here’s some tips on making your home feel like… home.

Green RV Living: 7 Great Tips for an Eco-Friendly Lifestyle in Your RV

Living in an RV can put a toll on the environment, here’s how to minimize your carbon footprint.

Plumbers can do more than just huge jobs, they’re great for the smaller things too.